For once, interpreters are in the news 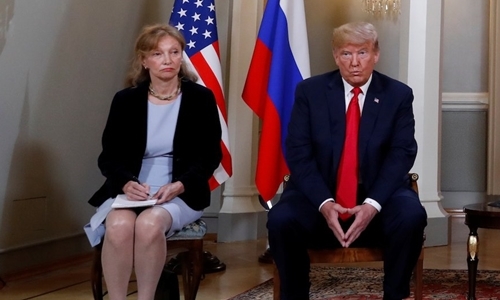 Within forty-eight hours of the Helsinki summit between Presidents Trump and Putin, Democratic Congressmen were calling for the American interpreter, Marina Gross, to appear before committees in the House and the Senate.

Robert Menendez, the lead Democrat on the Senate Foreign Relations Committee, said he wanted to see her notes, and discover what had, or had not been agreed in the private meeting between two of the world’s most powerful men. Other Democrats said Americans deserved to know the details of the conversation. This would have been to flout longstanding conventions that underpin international relations.

forcing her to testify would have set “a horrible precedent”

It would also have been against the professional code of interpreters. An American colleague of Ms Gross, Gemal Helal, who worked for four US presidents, said forcing her to testify would have set “a horrible precedent”, while the head of the foreign affairs committee in the Russian Duma said the move would have threatened the whole idea of diplomacy, constraining the abilities of leaders to have true one-to-one meetings .

The Democrats move was rejected, not on ethical but on political grounds. It behoves the US political establishment and the wider world to reassert the inviolability of the interpreter’s profession.

AIIC, the International Association of Conference Interpreters, has taken the unusual step of expressing its concern

There are professions where silence is a prerequisite. The Hippocratic Oath protects medical records. A confession is for a priest’s ears only, while Donald Trump has made much play of attorney-client confidentiality. Patients might not visit a doctor, or a sinner his priest unless they trusted that whatever was said would not be repeated. The interpreter’s code of conduct offers similar confidence — that whether in a boardroom discussing business plans or in a stateroom plotting future policies, there is a conduit that is not leaky, which is why AIIC, the International Association of Conference Interpreters, has taken the unusual step of expressing its concern.

We use cookies to ensure that we give you the best experience on our website. If you continue to use this site we will assume that you are happy with it.OkPrivacy policy